I headed cross to the Zurich area on Tuesday afternoon – which is quite a trek from where I live, around ~2.5 hours by train – to attend the first Zurich .NET Developer meet-up. The event was held in the Microsoft office in Wallisellen: they kindly provided beer and the meeting room, while the session itself was organised by members of the local .NET community. Considering the weather – a pretty serious snowstorm hit the country that day – the event was surprisingly well attended.

The main topic of the session was MVVM Light, a lightweight framework developed by Laurent Bugnion that makes it easier to implement the Model View ViewModel architectural pattern. Laurent spent some time introducing Windows 8 development and then went on to talk about how MVVM Light can be used to develop for both Windows 8 and prior releases of the OS (and Windows Phone, for that matter): 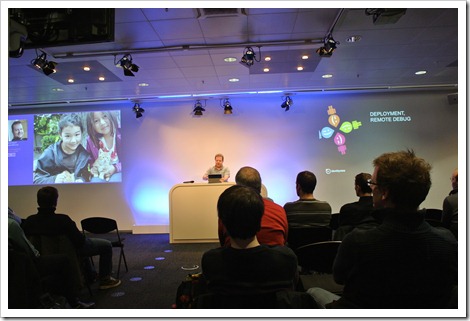 It was an interesting session: I’d made use of MVC before, but not MVVM. I admittedly tend not to do very much with UI frameworks – I dabble with WPF from time to time, but it’s a rare thing – but I’ll certainly consider using MVVM Light for UI-centric projects in future.

After this session I stayed around to chat with other attendees, the organisers and some Microsoft employees I’d met at previous events. It was a fun evening, and has certainly sparked my interest in going to other such events. I may even offer to present some of the work I’ve been doing to integrate Kinect with AutoCAD, which some members of the local .NET community may find of interest..

After checking out the other groups of interest on meetup.com, I’ve signed up for Zurich FSharp Users, 3D Printing Zurich and ARCH-Swiss Augmented Reality, although I know I’ll end up having to pick and choose between the various physical meetings, if nothing else because of the distance involved. I see there are also meetups in Basel and Geneva – both of which are a bit nearer to my home town – so perhaps I’ll look for interesting groups to join there, too.