Having too much fun 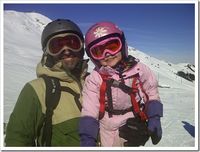 This picture should say it all. Back next week! Read more →

I’m up in the Alps enjoying a week of skiing (in my case snowboarding) with my family. Swiss schools have a very civilised “ski week” where the kids get a week off school sometime between the Christmas and Easter holidays – the specific week varies from canton to canton and this week happens to be Neuchâtel’s (it extends the usual March 1st holiday celebrating the 1848 revolution leading to Neuchâtel joining the Swiss confederation) – so I decided to take the week off to be with them. Here’s a quick snap I took this morning before heading up to... Read more →

Gamification is happening all over the place. In case you’ve missed what it’s all about, this short video should help. To get even more background, here’s another from the same source on augmented reality games, which is a follow-on from this video on alternate reality games. After having managed to get Apollonian Packings brought into the very cool PointCloud Browser, I thought it’d be fun to integrate some of the code from another of the PointCloud Browser sample apps, creating a little augmented reality game. Here’s the basic idea: each level consists of a packing brought into PointCloud Browser... Read more →

It’s been a good week for gadgets. Aside from getting a Netduino and some additional accessories through the post, I also received a newer version of the Leap Motion controller. The last one I had was a 0.4 version (at least that’s what was written on the box) and the new one is a 0.6.5. Here they are, side-by-side. The one on the left is the newer one, of course, although I quite like the Johnny 5 look of the older one, myself. I went ahead and installed the latest SDK – which took me from 0.7.1 up to... Read more →

After blinking LEDs with an Arduino Uno R3 and its younger step-sibling the Digispark, I decided to give the same treatment to their beef-cake second cousin, the Netduino Plus 2. James Maeding had been telling me to take a look at the Netduino for ages, so when I ordered some parts for my (optimistically speaking) forthcoming Kinect for ZX Spectrum integration, I decided to throw in a Netduino Plus 2. Now the Netduino Plus 2 retails for $60 in the US (and 80CHF here in Switzerland, as the device is assembled in the US), which means it’s at least... Read more → 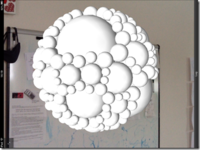 After my initial (only partially successful) attempt, earlier in the week, to get 3D geometry from the Apollonian web-service into a PointCloud Browser session, I finally managed to get it working properly. Given the currently fairly light documentation available – especially for the Viper JavaScript namespace which gives access to the 3D rendering capabilities in the browser – I ended up posting a question to the PointCloud forum. The answer was very instructive – I was able not only to get spheres of different radii displayed using the same mesh… … but also to apply different colours to the... Read more →

As a follow-on from this recent post, I decided to take a stab at a more generic solution for managing XData that should remain unique – i.e. attached to a single object – inside an AutoCAD drawing. This was prompted by an internal discussion that included a long-time colleague, Randy Kintzley, who suggested the approach taken in this post. (Thanks also to Tekno Tandean and Davis Augustine for adding valuable comments/feedback.) Randy’s suggestion was to avoid per-command event handling completely by adding an additional piece of XData – the handle – to objects that need to be managed in... Read more → 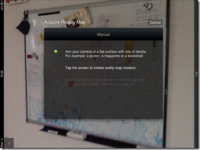 I first became aware of the work being done by 13th Lab a couple of years ago, but just last week someone pinged me about it again and re-triggered my interest (thanks, Jim :-). 13th Lab is a small Swedish company that has created some really interesting Augmented Reality technology. Many AR systems make use of fiduciary markers (which often look like sections of QR codes) to make it easier to determine where the 3D content should be positioned and visualized in the 2D image of the scene being fed from your device’s camera. Ideally, though, you want a... Read more →

I headed cross to the Zurich area on Tuesday afternoon – which is quite a trek from where I live, around ~2.5 hours by train – to attend the first Zurich .NET Developer meet-up. The event was held in the Microsoft office in Wallisellen: they kindly provided beer and the meeting room, while the session itself was organised by members of the local .NET community. Considering the weather – a pretty serious snowstorm hit the country that day – the event was surprisingly well attended. The main topic of the session was MVVM Light, a lightweight framework developed by... Read more →

I talked about some of the fun I’ve been having with Arduino in this previous post. I eventually added a pushbutton and a potentiometer to that particular circuit, modifying the code to watch for a hardware interrupt – to blink the LEDs only when the button is pressed – but also to apply a variable delay to the blinking (speeding it up or slowing it down depending on the direction in which you turn the knob of the potentiometer). I’ve now ordered an edge connector that will fit my ZX Spectrum: my next stage for the Arduino-based work is... Read more → 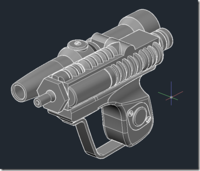 Being a bit of a Star Wars fan, I was delighted to come across this blog post by former MakerBot employee Todd Blatt (now working at Custom 3D Stuff), who modeled an Imperial Scout Trooper Blaster in AutoCAD for 3D printing. You can download the STL output and the original DWG file from here. Here’s a view on the finished gun with the “shades of gray” visual style: And here’s one that’s “realistic” with a nice metallic material applied to it: 3D printing functional weapon parts is clearly a contentious subject – which, according to some, may sadly lead... Read more →