Installing an SSD in my MacBook Pro

I arrived safely in Las Vegas for AU2012 and spent the day yesterday indulging in a little retail therapy to help get over my jetlag. I’m certainly feeling all the better for it. :-)

As we’re yet to start the conference itself, I decided to focus today’s post on some general preparation I made for this year’s conference: how I upgraded my main system to get it ready – in particular – for the rigours of running various OS installations and the tools I need for my “cloud & mobile” session.

A few weeks ago, I finally succumbed to a nagging temptation and installed a Solid State Drive (SSD) in my MacBook Pro. Newer models apparently include these as standard, which frankly makes a huge amount of sense: at around (probably less, now) a dollar per gigabyte, this hardware is finally getting affordable for decent-sized drives.

I ended up getting a 480 GB Intel SSD, but rather than simply replacing the HDD in my Mac, I bought one of these rather nifty caddies that can be used to mount a secondary drive (whether HDD or SDD) in the bay used by the optical drive. The optical drive – they’re called SuperDrives, probably because they’re now largely superfluous ;-) – can then be mounted in a separate USB enclosure, in case you really need to access something on a CD or DVD. You still have a slot for a CD/DVD in the Mac’s unibody casing, but obviously you won’t get very far if you try to insert a disk after the upgrade process is completed.

Here’s the caddy with the SDD mounted: 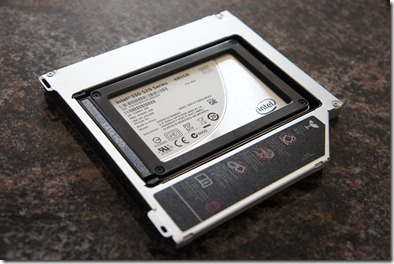 I ended up not mounting the SSD using this caddy, after all: apparently it’s best to put the primary drive (in my case the SDD) in the main drive bay and the secondary drive (my HDD) mounted via the caddy in the SuperDrive bay.

The hardware upgrade as a little fiddly, but nothing very challenging (there were lots of little screws that were quite tricky to remove and replace without a magnetic screwdriver of the right gauge, but I managed).

As part of the system upgrade, I decided to go ahead and install OS X Mountain Lion as the primary OS: I installed this directly on the SDD and – when prompted whether to copy the data and programs from somewhere else – I chose that everything should get sucked out of the Lion installation on the HDD. And – quite amazingly to me, after my years of fighting this issue with Windows – it actually worked perfectly: even my apps came across to the new OS installation and worked with only the occasional need to upgrade to a newer version.

My initial experience has been extremely positive: especially after the initial copy of the Parallels VMs to the new system, I found they just flew – opening in a few short seconds rather than around a minute. Apps launch and run more quickly and more smoothly. Life is good!

It continues to surprise me that technology has progressed to the point that local disk I/O can be the performance bottleneck in a system, but it’s clearly often the case. If you haven’t already considered getting an SSD – at least for your OS, but these days its affordable to go “the whole hog”, as I have done – then I strongly recommend you do so.