« Last chance to sign up for the APPHACK! | Main | AU 2012 Handout: Developing a simple Metro-style application for Windows 8 Part 1 »

A tale of two concerts

I was going to start posting my AU handouts today, but I’ll leave that until tomorrow (an exceptional four-post week for me!). I decided to fulfill a casual request from an old Autodesk buddy of mine, Thomas Schwaiger, although I thought I’d broaden the topic just slightly. :-)

I’ve been to see a couple of my favourite rock bands as they’ve passed through Switzerland, this year.

The first was a bit opportunistic: some friends had tickets to the original Radiohead concert date in Switzerland on their recent tour to be held at an incredible venue, a disused quarry in Saint Triphon, on July 9th, 2012. Radiohead seem to enjoy playing at special venues: I’d previously seen them at a concert in a Roman amphitheatre at Avenches (by far my favourite concert venue in our region).

The original date was canceled along with the rest of the tour after the tragic death of a crew-member during the set-up of their Toronto concert. The concert was re-scheduled to September 20th, which my friends couldn’t make, so my wife and I had the chance to go.

It turned out to be a great concert, but the whole experience was marred (some might say ruined) by logistics.

Perhaps I’ve been living in Switzerland for too long (I’m sure I’d be more fatalistic about this if I was still living in India, for example), but when things don’t work well I get a wee bit frustrated. We left the Neuchatel area for the drive down to Saint Triphon knowing that we’d have at least a good 2-hour drive to get there (we left at around 5pm, so knew we’d hit traffic at Lausanne as we headed down through Valais). But you put up with a bit of pain to see a great band in concert.

We expected a little pain but were completely unprepared for the complete shambles that was ahead of us. The venue was chosen for its unique setting, but it was the first time anyone had actually used it for a concert. And this one had 20,000 people coming to it.

The queuing started on the motorway: it took us the best part of an hour to take the exit the organisers were funneling everyone through. We queued to park the car. We queued to catch a bus to get to the concert venue. We queued to get into the venue.

Then things just got silly.

We queued to buy food and drink vouchers (you couldn’t pay with cash or cards at any of the stalls). We queued to get our food containers to put the food into, We then queued for the food itself. And then we queued for drinks.

Being British, I can queue with the best of them. I’m all in favour of properly managed (and ideally self-managed) queues. And these weren’t bad, as far as they went, in the sense that most people were waiting patiently in line. But the queues were just enormous. Most people gave up when the concert started, of course, but we really needed food (and something to drink, understandably).

The venue was amazing (here’s a photo reproduced from a fan site): As was the concert itself (here’s another photo from another): 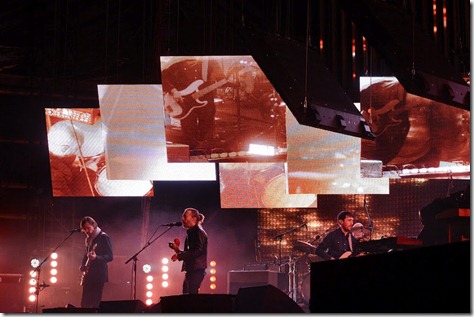 There are a number of videos on YouTube by people who were lucky enough to be close enough to the stage to actually see the performers with their own eyes – rather than the less-than-impressive screen you could see from the back.

When the concert ended (by which point we’d had a bite to eat and even enjoyed a few songs), we then had to join the surge of people heading back to the buses for the car park. We were there in reasonably good time – as we were near the back of the mass of people – but we still just couldn’t get on a bus: that privilege ended up being taken by less patient members of the crowd.

So we decided to walk, along with perhaps 30 other people. What had been a 10-15 minute bus journey ended up being more than an hour’s walk back to our car. One of my favourite bits was when the group took a wrong turn through the woods – the most logical way back, based on the information in Google Maps available to various clever people who had thought to mark their car’s GPS locations before leaving the car park – only to found a river (with no bridge) blocking the way. All part of the adventure, at this point: I’d decided to write the evening off, by now, and was actually having a pretty good time, but my wife was less than thrilled.

At least by the time we reached the car we didn’t have long to wait to get out onto the motorway, and the journey home was uneventful. But it was 7 hours of travel for less that 2 hours of concert (most of which was spent queuing): not a ratio I was very happy about, in the end.

Contrast this with our trip to see Muse at the St. Jakobshalle in Basel.

Again, we left at around 5pm, so what would have normally been a 1.5 hour drive was closer to 2.5 hours. But somehow – despite a huge crowd for a sold-out concert – we parked less than 100 metres from the venue. There was barely a single queue *anywhere*, whether to get in, get food or drinks (although I was there with my wife and three female friends, so there were a few modest restroom queues to negotiate :-).

The show was also great – even better than the last time I saw them in Bern. That previous event was held at the Stade de Suisse in Wankdorf (a venue for concerts and sporting events that was described as “Bern Stadium” during the BBC’s television coverage of the Euro 2008 tournament, for reasons that should at least be obvious to any Brits reading this). Being a nighttime, indoor concert, the crowd really got the full benefit of the impressive light show – something I felt was missing from the Bern event. 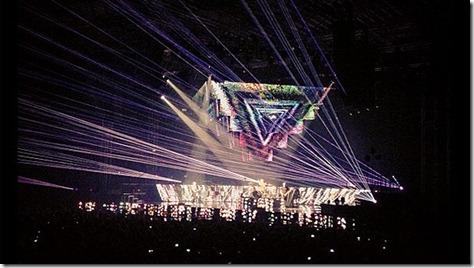 Here are some additional pictures of the event, as well as a YouTube video of the band’s entrance and their first number.

It makes such a difference to your overall experience, to have the logistics handled professionally at an event location that has the capacity to deal with the projected attendance: something I’m always really impressed by whenever I attend AU in Las Vegas (watching how the staff feed thousands of people at lunchtime is always a sight to behold). Wow – I actually managed to tie this post in to an Autodesk-related topic (something I didn’t expect when I started writing it :-).

OK, so there you have it, Thomas. The post ended up being less about the Muse concert than about the impact of logistics on a great all-round concert (or conference) experience, but that’s what ended up getting written.