As I ended up not being able to post during the last week or so, I’ve switched to the past tense now that I’m back in Switzerland. I’ll start back on more technical topics in the coming days, but as I’m still re-adjusting I may as well wrap up my holiday’s travelog, first. :-)

After the unexpected highlight of visiting the Shard, I was worried the remainder of our time in the UK might prove a disappointment. Thankfully, my worries were completely unfounded: we had a great trip to London’s Natural History Museum (with a quick stop by Harrods for its excellent toy section) before heading over for a couple of marvellous days in LEGOLAND Windsor. These would have been enjoyable even without the fact we stayed in the amazing LEGOLAND Hotel, but that just took it to another level: the kids will be talking about this trip for a long time to come.

But the real treat for me at the park was due to an incredible bit of serendipity: getting to meet Leon Keer.

When I saw the video of this work being developed – and I was certain I’d blogged or tweeted about this, at the time, but for the life of me can’t find any reference to it – my first thought was that this extremely manual process could be streamlined fairly easily with CAD: working from 3D could really help with the development of the concept, as well as generating some rough outlines for the geometry as it should be translated onto the ground plane. Perhaps a SKEWSHOT command to complement AutoCAD’s FLATSHOT. ;-)

And when I say it’s manual, the process for translating the 3D view – which is a 2D representation of a 3D scene rather than of a true 3D model – to the actual drawing involves lots of pieces of string.

So back to the LEGOLAND story… already being a fan of Leon’s work, it was an incredible surprise to look down from the Sky Rider to see him working on another 3D LEGO street painting, this time of super heroes. 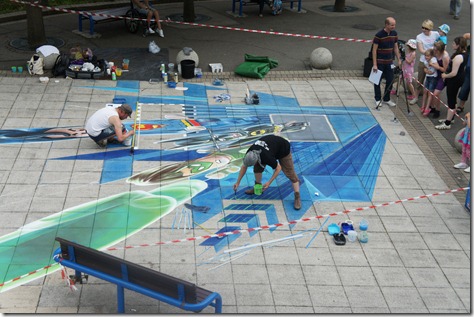 After coming down from the ride, we wandered over and spent quite some time talking both to Frankie Shear from Moniker Projects and to Leon himself. It was very interesting to hear some of the background to the commission, and the fact that it very nearly didn’t happen due to concerns over their original choice of scene and the recent, tragic events in Colorado.

Thankfully the project did go ahead, and we got to witness it developing over the next few days, culminating in a photo of the completed painting from close to the ideal viewing location (with Leon in the background, taking his own snap of the scene from a much less optimal location :-). 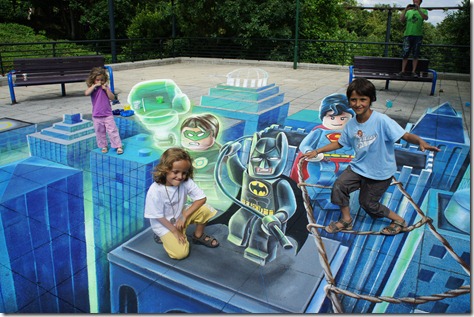 I’ll certainly stay in touch with Frankie and Leon, to see whether there’s some chance of collaborating in some way. To kick things off, I think I’m going to need a 3D model of a basic LEGO minifigure and some room on our patio. :-)

To wrap up the rest of our stay in England and the trip home, some additional highlights: