I arrived back home on Sunday afternoon from a really fun event: Autodesk Europe’s annual 7-a-side football (i.e. soccer) tournament. This year it was held in Verona, Italy, which was a comfortable 5-6 hour drive from my home near Neuchâtel. This year I played for a team made up of employees from Autodesk’s Global Services (to which ADN belongs) and Worldwide Marketing teams (two teams ended up being combined as both were a little short on players). 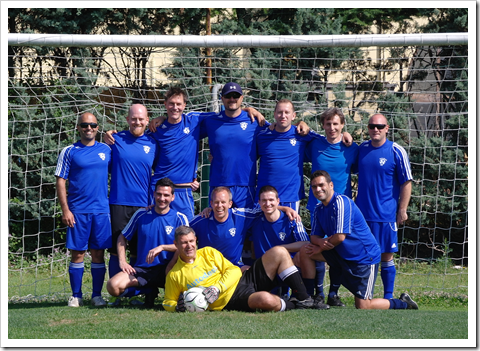 The players (from left-to-right and back-to-front):

Many of you will recognise members of the DevTech team: me, Jeremy, Fents, Gary, Marat & Adam (and formerly Miro, too).

While all of us tried to train regularly in advance of the tournament, we hadn’t all played together before the day itself, which did put us at a disadvantage when playing against teams who were co-located. But playing with so many close colleagues from around the world makes for a lot of fun, irrespective of the result.

We played three “qualifying” games in the morning (although as there were only 8 teams in the competition and we were playing quarter-finals, this was really about ranking the teams: the better a team did in the morning, the “easier” their quarter-final opponent would be, at least in theory) of 12 minutes each way. Our group was arguably the toughest, as we had last year’s champions (the UK), as well as a very strong visiting PSEB (Platform Solutions and Emerging Business) team. At the end of the morning session, we were placed 3rd in the group, having lost to PSEB and the UK, but won against Germany.

In the afternoon, we beat Italy during our quarter-final and went on to get knocked out by Neuchâtel (the team I train with and who I’m delighted went on to win the tournament) in the semi-finals. Both matches were 15 minutes each way, after which we had a penalty shoot-out with PSEB to decide 3rd place (they were clearly the better team – having beaten us earlier in the day – but we did manage to win on penalties).

So after 132 minutes of very tough – but very fun – football, the GS-M team won the 3rd-place trophy.

Congratulations to all involved, and especially to the well-deserved 1st- and 2nd-placed teams, Neuchâtel and the UK.