Today is a holiday, here in Switzerland, and I suffered a PC failure late last week, so I'm writing this without access to my usual system resources (AutoCAD 2012 and Visual Studio 2010, for instance). Despite these minor complications, I did want to let you know about this very important announcement.

The introduction of the companion apps via the Autodesk Exchange Apps tab inside AutoCAD 2012 - a mechanism introducing AutoCAD's extensive customer base to the value of applications from AutoCAD developers - could well turn out to be a watershed moment in the history of AutoCAD, comparable to the introduction of AutoLISP. At least that's my sincere hope... time will tell. :-)

Here's a screenshot from Autodesk Exchange: 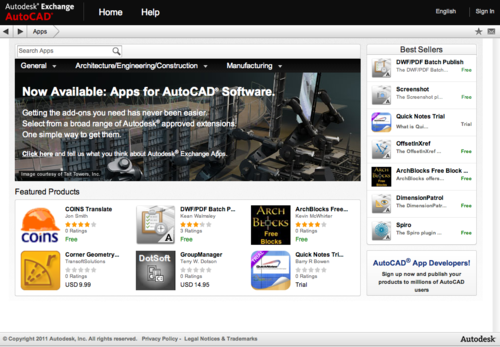 The ADN and AutoCAD Engineering teams have been working really hard on this feature, over the last year or so. The Autoloader mechanism introduced into AutoCAD 2012 was a core piece of the infrastructure needed to make this work, for instance. I was also asked to package up a number of our Plugins of the Month, helping populate the store early on and providing a number of implementation/packaging examples.

Be sure to check it out and - if you haven't already - consider posting your plugins via this mechanism. This could well prove to be a game-changer for AutoCAD users and developers alike.