February’s Plugin of the Month live on Autodesk Labs: AveragePoint for AutoCAD

Another month, another plugin. :-)

As announced over on Scott’s blog a few days ago, the latest Plugin of the Month is now live. It’s based on the code in this previous post, the only change being how the average point gets returned to AutoCAD’s command-line: we now send it as a string that gets interpreted as a LISP point, rather than straight, comma-delimited decimals, because a) it reduces my concerns about working on different locales and b) AutoCAD deals with the points in this format much more nicely if the command is called non-transparently. Thanks to those who made suggestions and helped test this, particularly Scott McFarlane and Thorsten Meinecke.

Today I’d also like to talk a little bit about the Plugin of the Month initiative, in general. If you haven’t heard about its background – but are interested in learning more about it – I suggest taking a look at the article in AUGIWorld from last March/April.

While we initially ran the project as a science experiment – we really weren’t sure of the outcome – we’re now convinced it’s worth continuing (for now, at least ;-). Autodesk customers and developers are finding the tools valuable, and this is reflected by the feedback we receive and the download numbers. Many of you will know that Autodesk’s fiscal year runs from February 1st to January 31st, which means a lot of our planning and analysis happens on this cycle. Looking at the data for the fiscal year that has just closed (FY11), the various plugins were downloaded in total over 17,000 times. 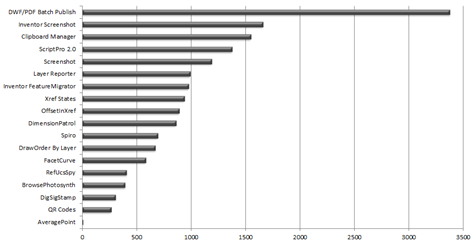 From the above graph you can see one clear “winner” – the DWF/PDF Batch Publish tool, which was downloaded 1,800 times during its first month of being posted. That said, each plugin’s popularity will to some extent depend on the length of time it has been posted, of course. AveragePoint was posted a day or two before the end of January – even if it wasn’t then announced via a blog post – which explains why it was downloaded a handful of times in FY11.

Most of the plugins we’ve posted have so far been for AutoCAD. The primary reason is admittedly because I’ve been running the initiative, developing many of the plugins myself and helping post plugins submitted by external developers and members of my team. We have posted two Inventor plugins – a version of Screenshot by Xiaodong Liang and the Feature Migrator by Philippe Leefsma – but over the course of the coming year we’re going to broaden this out further. Our plan is to post a majority of Revit and Inventor plugins during FY12.

Now this doesn’t mean that we won’t post the occasional AutoCAD (or other) plugin, but we’re driving much harder on the Revit and Inventor side of things. The members of my team who focus on these products are already engaging on the development work, which also means we’re having to get more systematic about our development and QA processes (those of you who know me may or may not be surprised to hear that while I’m quite detail-oriented, I’m not especially process-oriented :-). Having other members of my team engage on this will certainly bring some process discipline to the initiative and will also hopefully free up more of my time to focus on other things.

Anyway – that’s a quick update on where things stand with Plugin of the Month. Next week we’re going to work on a really interesting plugin idea that came in via the Autodesk Labs feedback alias, and one I do expect to become a posted plugin at some point over the coming year.