« Previewing the contents of the clipboard in an AutoCAD palette using .NET | Main | Automatically cropping a bitmap (slowly) »

As mentioned yesterday, I went ahead and integrated previewing into the Clipboard Manager Plugin of the Month. I won’t include the code directly in the post – it’s fundamentally similar in nature to that posted yesterday and is, in any case, included in the project. There were a few additional tricks needed, such as modifying the SplitterDistance property of a SplitContainer to make sure the aspect ratio of the image gets maintained, but nothing particularly earth-shattering.

Here’s the updated project – I’ll be looking into the “save between session” feature (which I suspect is going to morph into a “save to DWG file” feature, as that feels like the simplest and safest to implement) before posting a new version on Autodesk Labs.

Here’s this version in action: 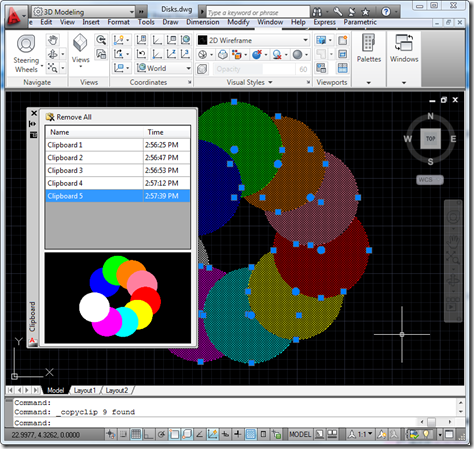 I’m pleased with how the preview adjusts in size according to the image contained by the selected item. I’d be happy to hear from people who’ve given it a try and formed an opinion, one way or another. :-)