Just back from a great little break: yesterday we drove across and spent the day at the Swiss Museum of Transport in Luzern (more on that in a bit), before having dinner at the Rathaus Brauerie opposite the Kapellbrucke. Then we spent the night at the Hotel Bellevue, a very friendly hotel near the edge of Lake Luzern, and today headed across to Ballenberg – with its amazing historical view of Swiss life – before arriving home this evening.

All in all a great deal of fun crammed into two short days. One of the highlights for me was a special exhibit at the Transport Museum: live demos of the Menzi Muck A91 4x4 Plus excavator. Now don’t get me wrong – I’m far from being a huge fan of construction equipment, although I’ve been known to watch the odd episode of Bob the Builder with my kids ;-) - but this is something special.

To get a feel for what I mean, check out one or both of these two videos I shot of the A91 4x4 Plus in action with my Flip (apologies for the amateurish camera-work). I don’t know whether to describe the driver – who I chatted to after the last demo, as I was close to being the only spectator by that time of the day – as a driver, acrobat or artist. He used the same core “choreography” across the various demos, but I recorded the first from opposite the speaker (therefore catching more of the music and narrative) and the second from next to it (therefore catching almost none of it).

Some of the above positions really made me think that perhaps we’re not so far off having mecha or powered exoskeletons such as those seen in Avatar.

I took about 250 photos of this incredible vehicle and uploaded them to Photosynth:

I then used this month’s Plugin of the Month, BrowsePhotosynth for AutoCAD, to pull the resultant point cloud into AutoCAD 2011: 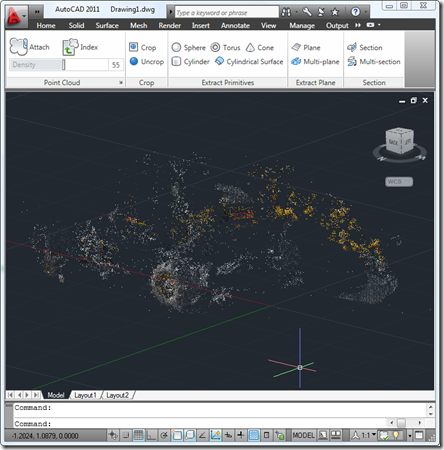 I chose a relatively flattering angle for the above shot. I didn’t upload many overall pictures, showing how the various parts connected, so I think I may need to try again with some from my other camera (my digital SLR had the zoom lens on it, and I was too lazy to swap). All good fun, though! :-)

I’ve just received an email from Michael Marx at Westcam telling me that Menzi Muck made use of Autodesk Inventor to design this product (something I wasn’t aware of, but am very happy to hear :-). If I get any further information I’ll post a follow-up. Thanks, Michael!