November’s Plugin of the Month live on Autodesk Labs: ScriptPro 2.0 for AutoCAD

As mentioned previously, Viru Aithal, from DevTech India, has been working hard on a replacement for the venerable ScriptPro tool. I’m delighted to say that it’s now ready, and is live on Autodesk Labs as November’s Plugin of the Month.

Viru took the codebase he developed for the DWF/PDF Batch Publish tool and created ScriptPro 2.0, written from the ground up in C# and developed without any dependency on a specific AutoCAD version. Viru’s approach uses the equivalent of late binding to call into AutoCAD through COM and so doesn’t require a specific AutoCAD Type Library. Which means the tool should also work for future versions of AutoCAD: there’s no longer any need to wait for an update to the tool. And one advantage of being written in a .NET language is that the application works as well on 64-bit platforms as it does on 32-bit ones (a historical frustration of ScriptPro users).

ScriptPro 2.0 has a new project format – with the file extension .BPL (for Batch Process List). While it can load old ScriptPro projects (.SCP), it doesn’t yet have perfect feature parity – there are some ScriptPro-specific keywords that have not yet been implemented in the 2.0 release, but (providing we hear it’s important to do so) we’ll get there.

The tool has a ribbon UI – built using WPF – but the bulk of the functionality is packaged up in a WinForms User Control and hosted by the WPF app (me may yet move the whole thing to WPF, in time). Here’s the new UI: 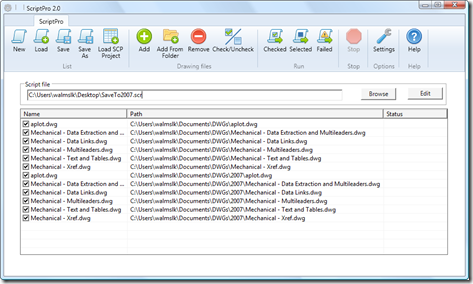 And the best thing is that – as a Plugin of the Month – it comes with the complete source code for you to dig into and extend. Be sure to take a look at this very exciting new tool and let us know what you think.