« Proving the concept: one-click point cloud generation inside AutoCAD 2011 with Project Photofly | Main | Does anyone out there use unnamed, empty (or emptyish) groups in AutoCAD? »

During my recent stay in the Bay Area, Stephen suggested I join the San Rafael-based DevTech team to record another ADN DevCast. Our hope was to cut down the length somewhat by focusing on a single topic, but those plans pretty much went out the window as soon as I started talking. :-S :-)

Thanks to Stephen, Gopi and Fenton for their warm welcome in San Rafael, and for keeping the session interesting with all their questions!

[We experienced a few technical glitches due to my system getting very close to its end-of-life (it only has a 90 GB hard-drive, so I’m forever uninstalling/reinstalling software and often run with just a few GB of free space available, which didn’t prove enough for Camtasia to record all we wanted it to). Stephen has done a great job of editing the issues out, but you may see the odd continuity quirk.] 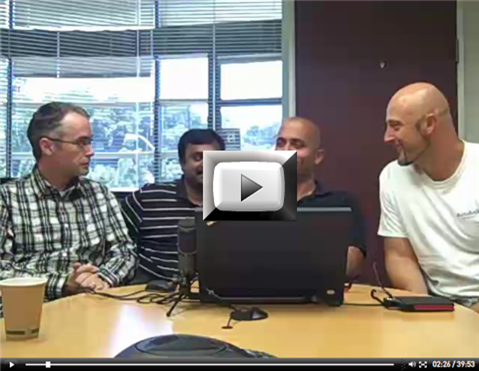 You can also download the recording to view locally (37.4 MB), should you so choose.

These sessions are (very clearly) unscripted and I can see there may be a few areas that prove confusing to people. If that’s the case, please post a comment and I’ll do my best to clarify my intended meaning.

Brian Mathews, our VP of Autodesk Labs, kindly watched the video and clarified a few points regarding Photo Scene Editor that I felt were worth sharing. (In case it wasn’t obvious to viewers of the DevCast, I’m far from being an expert in the use of the tool, so I would recommend that people especially interested in the use of Photo Scene Editor check out the videos linked from its Labs page.)