Free online sessions on the 2011 products and their APIs

We’re running online repeat sessions of our annual Developer Days events (which are only open to ADN members and other people covered by non-disclosure agreements). These online sessions are free and open to anyone. Here’s the schedule: April 13 – AutoCAD® 2011 New APIs April 20 – Autodesk® Inventor® 2011 New APIs April 21 – Revit® 2011 New APIs May 12 – AutoCAD® Civil 3D® 2011 New APIs To register to attend, please do so via our training schedule (also accessible via http://autodesk.com/apitraining –> Schedule). If you’re more interested in understanding what’s in the 2011 family from a product... Read more →

As I mentioned in the last post, I’ve been working on an application that brings across point clouds from Photosynth into AutoCAD. Before we get into the details, I’d like to lay some of the groundwork for this series of posts by talking a little about the bigger picture: “reality”. How about that for bigger picture? It doesn’t get much bigger than that, unless you’re working on the LHC at CERN. ;-) Reality is increasingly being captured in digital form (Google StreetView, Bing Maps, Photosynth) and augmented (just look at the cool iPhone apps available in this area, such... Read more →

As you’re by now probably aware, the 2011 family of our products is now shipping. I’ll have lots to say on AutoCAD 2011’s new API features over the coming weeks/months, but for now here’s a quick post on the items from the most recent API Wishlist Survey that we delivered in this release (the items we’ve addressed in some way are in bold below): .NET API for Property Palette Parametric Drawing .NET API Enhanced Dynamic Block API Runtime Ribbon API enhancements Enhanced Dynamic .NET language support Improved .NET<->LISP Interop Object transparency API Enhance Visual LISP IDE Boundary tracing API... Read more → 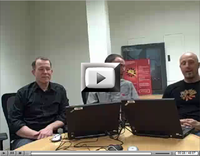 Well, they’ve done it again. Having received positive feedback on Episode 1, Stephen and Fenton have now recorded another ADN DevCast, this time with a guest appearance of another member of the DevTech team, Cyrille Fauvel. During this episode they talk about disposing in .NET, diagnosing DLL load problems using gflags, and deepcloning in ObjectARX. If you prefer you can download this episode for offline viewing (36 MB) and take a look at the accompanying samples (95KB). Enjoy! :-) Read more →

This is both my 500th post on Through the Interface and my 500th tweet as @keanw. All my blog posts now go out via Twitter, but this hasn’t always been the case, so this is partly coincidence and partly planned (since I noticed a few weeks ago that I was getting close to this number for both blogging and micro-blogging sites). Thanks to all of you regular readers for your support, your feedback and the questions that have inspired me to write many of these 500 posts. Keep them coming! :-) And many thanks to my team, DevTech, for... Read more →

It seems to come around sooner each year, but then that’s probably just me getting older, as everything else also seems to. :-) The call for proposals for AU 2010 is now open, and will remain so until May 14. The event itself will be held from November 30 to December 2 at the Mandalay Bay in Las Vegas. Over on the AU BLAUG, it explains that we’re looking for: Fresh topics and content More advanced courses Business management solutions Product specifics Tips & Tricks Customization and programming topics are – as ever – extremely popular sessions at AU,... Read more →

Using a DrawJig from F# to create Spirograph patterns in AutoCAD

Last week we looked at a preliminary version of this application that made use of an EntityJig to display a Spirograph as we provided the values needed to define it. While that was a good start, I decided it would be better to show additional graphics during the jig process, to give a clearer idea of the meaning of the information being requested from the user. I wanted, for instance, to show temporary circles indicating the radii of the outer and inner circles, mainly to make it clearer how the various parameters affect the display of the resultant Spirograph... Read more →

The latest edition of AUGIWorld, the official magazine of AUGI (the Autodesk User Group International), has an article (written by me, which does indeed make this a shameless plug :-) on our Plugin of the Month initiative. Thanks to Mark Kiker and Marilyn Law for helping make this happen; it’s great to get the word out to more people who’ll benefit from these utilities. Read more →

This week I’m going to posting a few topics related to F#, as it feels as though I’ve been neglecting it, of late. And as this technology is going to hit the mainstream very soon – when Visual Studio 2010 ships – it seems all the more important to keep one’s F# skills honed. We’re going to start the week with an F# equivalent to the code shown in this previous post, where we go through and reflect on the commands exposed by an assembly in order to create corresponding demand-loading Registry keys automatically. We’ve shipped VB.NET and C#... Read more →

Using a jig from F# to create Spirograph patterns in AutoCAD 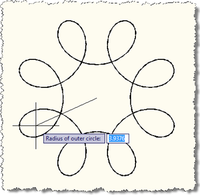 After my initial fooling around with turning AutoCAD into a Spirograph using F#, I decided to come back to this and bolt a jig on the front to make the act of making these objects more visual and discoverable. The process was quite interesting – I’d created jigs from Python and Ruby, but not from F#, so this was a first for me. It’s also a multi-stage jig, which is fun: we acquire the outer radius of the pattern followed by the radius of the smaller circle and the distance of the pen from the smaller circle’s center. At... Read more →

I’m just taking a few days off to visit family in Italy. We’re sitting in a brand-new EuroCity train on its way from Bern to Milano Centrale. Aside from it being very comfortable – which is new, most of the other times I’ve made this journey have been in cattle-wagons – it’s got one cool feature I hadn’t seen before and simply had to mention: real-time tracking of our progress inside Google Earth displayed on overhead screens inside the cabin. Now you needn’t even look out of the window to see where you are! Simply marvelous! Unfortunately this visualization... Read more →

I’m very pleased to announce the availability of this really interesting Plugin of the Month over on Autodesk Labs: Batch Publish for AutoCAD. Here’s an excerpt from the ReadMe (which I happen to have written, but anyway): This plugin can be used with AutoCAD to simplify the process of publishing sets of drawings to DWF and/or PDF. It runs as a command within AutoCAD – as opposed to a separate executable – and uses a separate executable to monitor AutoCAD's health and restart it, as needed. The status of the batch publishing operation is stored to disk, allowing it... Read more →