This is the second post in the series looking at the new APIs in AutoCAD 2010, and following on from this post. I've copied the information in this post from the recently-published Platform Technologies Customization Newsletter, a quarterly newsletter available to ADN members. A big thank you to Stephen Preston, Fenton Webb and Gopinath Taget for putting the material together.

If you know Inventor® software products, then this feature will seem strangely fam

(If you’re not familiar with parametric design - or ‘constraining’ a drawing dimensionally and geometrically – then watch Heidi’s presentation [This link is to the ADN site - I will post more about the parametric drawing capabilities of AutoCAD 2010, in due course - Kean] for a demonstration of the feature.)

The Parametric Drawing API is available in ObjectARX only, and exposes the framework for the feature at a very low level. This makes the API very flexible, but does make it quite complex to use. You’ll find a comprehensive overview of this API in the new ‘Parametric Drawing’ section in the ObjectARX Developers Guide.

As we expect this feature to be expanded in the next release, we encourage you to experiment with this API and send us your feedback.

The .NET CUI API has now been extended to include APIs for modifying RibbonBar elements in the CUI. Behind the scenes, the old CUI XML file has been converted to a CUIx package format. You should use either the CUI editor or the API to manipulate the CUI file. Manual editing is not supported.

We’re increasingly using the Windows Presentation Foundation (WPF) for our user interface elements. The RibbonBar is a great example of this. You can now easily derive your own RibbonBar controls from one of our stock controls, and make them available to your users in the AutoCAD CUI editor. 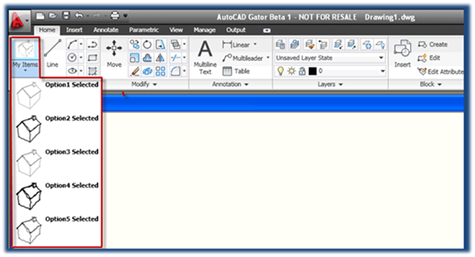 Take a look at our sample application included with our Developer Days presentation material [material posted on ADN that I expect to publish publicly via this blog, in due course - Kean], and watch out for a webcast on this topic in the coming year.

The new PDF Underlay feature comes with new AcDb classes to support the underlays – AcDbPdfDefinition and AcDbPdfReference. These work the same as the Dwf and Dgn classes introduced in previous releases.

Although it won’t be ready for the AutoCAD 2010 release, our TechPubs team are working on the first release of a long awaited AutoCAD .NET Developers Guide. We expect this to be available sometime in the summer.

That's it for this preliminary overview of the APIs coming in AutoCAD 2010. I'll be following up with my own in-depth look at the various APIs over the coming months.