I'm still a little frazzled after transcribing the 18,000 word interview with John Walker (and largely with two fingers - at such times the fact that I've never learned to touch-type is a significant cause of frustration, as you might imagine). I'm also attending meetings all this coming week, so I've gone for the cheap option, once again, of dipping into my magic folder of code generated and provided by my team.

The technique for this one came from a response sent out by Philippe Leefsma, from DevTech EMEA, but he did mention a colleague helped him by suggesting the technique. So thanks to Philippe and our anonymous colleague for the initial idea of calling -DIMINSPECT.

The problem solved by Philippe's code is that no API is exposed via .NET to enable the "inspection" capability of dimensions inside AutoCAD. The protocol is there in ObjectARX, in the AcDbDimension class, but this has - at the time of writing - not been exposed via  the managed API. One option would be to create a wrapper or mixed-mode module to call through to unmanaged C++, but the following approach simply calls through to the -DIMINSPECT command (the command-line version of DIMINSPECT) to set the inspection parameters.

I've integrated - and extended - the technique shown in this previous post to send the command as quietly as possible. One problem I realised with the previous implementation is that UNDO might leave the user in a problematic state - with the NOMUTT variable set to 1. This modified approach does a couple of things differently:

One remaining - and, so far, unavoidable - piece of noise on the command-line is due to our use of the (handent) function: it echoes entity name of the selected dimension.

"\nEntity must be a dimension."

// Get the old value of NOMUTT

Here are the results of running the INSP command and selecting a dimension object. First the command-line output:

And now the graphics, before and after calling INSP and selecting the dimension: 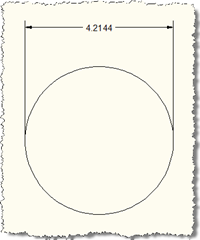 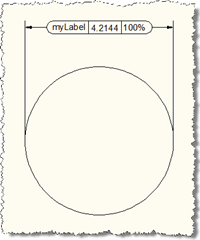 In the end the post didn't turn out to be quite as quick to write as expected, but anyway - so it goes. I'm now halfway from Zürich to Washington, D.C., and had the time to kill. I probably won't have the luxury when I'm preparing my post for the middle of the week, unless I end up suffering from jet-lag. :-)