Pointing at clouds: more random musings on AutoCAD and F#

On my way back from the US last week, I started thinking more about uses for random numbers inside AutoCAD: especially ones that allow me to try out some possible application areas for F#.

There's something deliciously perverse about using random numbers in Engineering systems, where it's really important for outcomes to be deterministic (i.e. predictable) & precise. And that perversity appeals to me quite strongly, for some reason. Feel free to drop me a mail if you have an idea why that might be, any amateur psychologists out there... ;-)

So, I got to thinking... an interesting domain area for our development partners is that of laser scanning. These systems often generate huge (and I mean huge) data-sets: millions upon millions of points are generated by laser scanners (often known as point clouds), and these need to be managed in some way by software - often by solutions that are integrated with Autodesk products.

So I thought, wouldn't it be fun to go through an AutoCAD model and generated huge arrays of points representing the shell of solid objects in the model - essentially generating random point clouds - to see how F# deals with such humungous data-sets.

The general approach I decided to use was to go through all of the entities in the model-space, open them up and - for those that are of type Solid3d - generate 100,000 points (say) that are found on the shell of the object. To find points on the shell, I adopted the following technique:

To display each point we just draw a zero-length vector, which I decided to make red.

In my initial implementation, I used a classic functional programming technique, that of tail recursion. As a bit of a purist, I try to use functional (as opposed to imperative) techniques whenever I can when writing F# code. The problem is that tail recursion can significantly drain your stack space, as it results in a new function call - and a new level in the call stack - for every item in your list (and after all we're talking about huge numbers of points). Some compilers/evaluation systems can optimise out the recursive function call, reducing it to a simple branch, but F# doesn't currently appear to do so with my code (it is supposed to, so there may be something about the way my recursive functions are structured that prevents them from being identified as tail-recursive).

Here are a couple of examples of tail-recursive functions - one to generate a list of points, the other to draw them:

// A function that accepts an ObjectId and returns

// A recursive function to show the contents of a list

While more elegant from a functional perspective, this elegance results in sub-optimal execution. The way to "fix" this is to introduce iterative code - whether a for, foreach or while loop - to avoid the recursion.

Here's the complete F# code that makes use of iterative techniques rather than recursion:

// Get a random vector on a plane

// First we get the absolute value

// Then we negate them, half of the time

// Get a random vector in 3D space

// Note: _ is only used to make sure this function gets

// executed when it is called... if we have no argument

// it's a value that doesn't require repeated execution

// First we get the absolute value

// Then we negate them, half of the time

// Now we declare our command

// Get appropriately-typed BlockTable and BTRs

// A function that accepts an ObjectId and returns

for pt in pts do

for pt in x do

// Here's where we plug everything together...

// As usual, committing is cheaper than aborting

Here are the results of the PTS command called on a set of 6 Solid3d objects, essentially generating and drawing 600,000 points. The code doesn't currently result in any persistent graphics at all - if you change views the points all disappear. At some point I'd like to extend this to store the generated points persistently, but for now the point of the exercise (no pun intended :-) is more to see how F# performs with large data-sets, rather than how we deal with the issue of persistence. 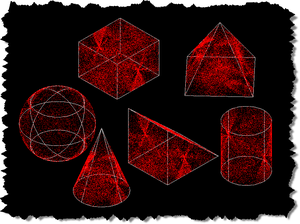 A final note: I now realise the use of tail recursion was almost certainly the wall I hit with the F# implementation in this previous post.