[As mentioned in the last post, I'll be publishing chunks of the handouts for my AU classes via this blog over the coming weeks]

This session focuses on downstream technologies that can be used to access DWG content outside of AutoCAD-based products. We’re going to start by creating a basic model inside AutoCAD comprised of 3D solid objects, and then look at a simple AutoCAD .NET application to access information about those solids. We will then take the same code and build a non-graphical (in terms of geometry - it does, after all, have a GUI) application around it using Autodesk RealDWG. Later on we’ll look at the same code running inside a custom-branded design application built using AutoCAD OEM.

We will also spend time looking at DWG TrueView and the DWG HOOPS viewer, to understand how they might be used to enhance the graphical display of DWGs without the editing overhead introduced with AutoCAD-based products.

Firstly, why are we using 3D solids in this example? The choice was somewhat arbitrary – the point is really to demonstrate the ability to access properties of objects stored in a DWG file without AutoCAD running – but it does suit our overall purpose for a few reasons:

A quick word on the programming technology used in this demonstration. The code samples are all in VB.NET: regular readers of my blog (http://blogs.autodesk.com/through-the-interface) will know I have a preference for C#, having spent years working with C++, but I’m sticking with VB.NET for this demonstration: we originally developed the material using VB.NET to reach the broader audience of Visual Basic professionals.

These handouts, along with the sample projects demonstrated within them, have been posted to my blog: http://blogs.autodesk.com/through-the-interface. Only significant portions of code will be highlighted in this document, and even those should not need to be typed back in. :-)

Create a simple 3D model in AutoCAD and access it using .NET

There are various 3D modeling commands available in AutoCAD, of which detailed review is outside the scope of this session. We simply want to populate a model with a number of 3D solids with materials attached. Here’s the kind of thing we’re looking for: 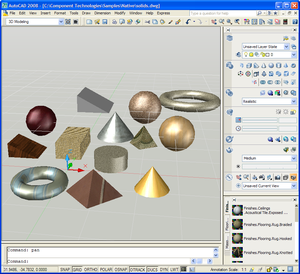 Figure 1 – a simple set of 3D solids inside AutoCAD

Now we’re ready to start looking at the code we’ll use inside an AutoCAD application, as well as within RealDWG and AutoCAD OEM, to access the information in this model.

Here’s code from a file called SolidInfo.vb to represent a data structure we’ll use to collect information about our 3D solids – their type, location, ID (the AutoCAD handle) and volume.


' The SolidData class encapsulates the data we

' want to collect and display for Solid3d objects

' (used when defining the data a grid is bound to)

Now we have a function that will take a database and iterate through its contents, collecting information about 3D solid objects and adding them to a Data-Bound Grid passed in as the second argument. This grid should be created in the UI to be bound to objects of type SolidList (defined above).

' in a form, typically). It also returns the total volume

' of Solid3ds in the Database


' We will return the total volume of solids

' in the modelspace of this Database


' Loop for each entity in the modelspace


For Each entId As ObjectId In btr


' If it's a solid, then gather its data


If TypeOf (ent) Is Solid3d Then


' Use the COM API to access the type string

' (exposed through neither ObjectARX nor .NET)


' Use the centroid for the location


' And add its volume to the total


' Committing is cheaper than aborting,

' even if we didn't change the drawing

We will now build the code into a complete AutoCAD .NET application which defines two commands – the first, SD, launches a dockable AutoCAD palette listing the 3D solids in our model and totaling their volume, and the second, SD2, does the same from a standard dialog: 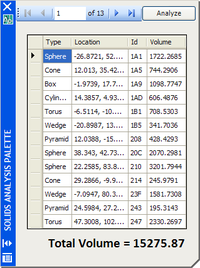 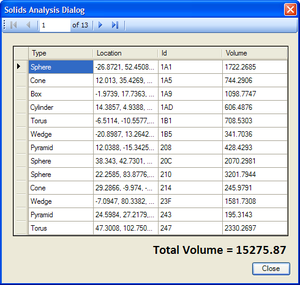 These two dialogs share a common implementation: they both contain a UserControl that contains a DataGridView and a BindingNavigator to browse the contained records. There’s an optional “Analysis” button in the control, which allows the analysis operation to be launched manually. This is hidden when within the Dialog version, as it was primarily intended as a modal interface which launches the analysis automatically on load.

Build a RealDWG application from the AutoCAD .NET code

We start by creating a new Windows Application in Visual Studio 2005: 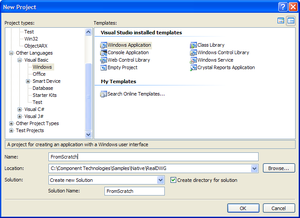 Figure 3 – creating a new project for our RealDWG application

The first step is to copy across the SolidInfo.vb file into our project folder and add it into the project as an existing item. To get the project to build you will need to select two project references: one for the RealDWG managed assembly, and one for the COM type library: 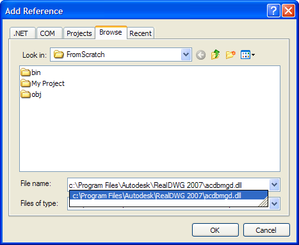 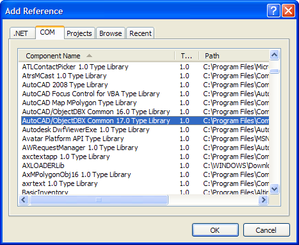 We need the COM type library to work around a specific limitation in the .NET API to AutoCAD and in ObjectARX, its underlying API. These APIs do not provide access to the type of a solid – whether it’s a sphere, a cylinder or a pyramid, for instance – so we need to use COM to retrieve the information.

New VB.NET Windows Application projects contain a default form, Form1.vb. Rename this to MainForm.vb and design a simple user interface with a TextBox for a filename (named DwgFileToAnalyze), a Button to browse to the file (named BrowseButton) and a DataGridView (called whatever you like :-). When you come to adding the DataGridView you will be prompted to define a Data Source. Select “Add a New Data Source” of type “Object”. From here you will be able to browse down to our SolidList class: 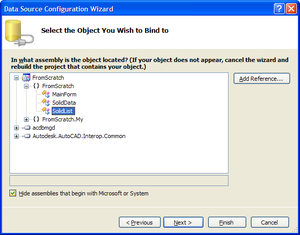 Figure 5 – adding a DataGridView and its associated Data Source

Now just add a Label (named TotalVolumeText) at the bottom (going the whole width of the dialog, setting the AutoSize property to “False”, the Font to something nice and visible and TextAlign to “MiddleRight”). You can leave the contents blank, as we’ll be setting those programmatically.

The User Interface is now done – we’re ready to flesh out the application functionality to call our AnalyzeDatabase() from SolidInfo.vb.

First we need to implement some code to make our RealDWG application valid. We’ll add a new file called Program.vb and populate it with a base HostApplicationServices object:

I've edited the above text to delete my personal RealDWG license keys – you will need to license RealDWG to receive valid license keys of your own for this code to work. The FindFile function is needed to help RealDWG find supporting files such as fonts. As we’re only accessing information about 3D solid objects it is not important for us to implement this completely.

Now we go to the code window for MainForm.vb – either by double-clicking the form, the browse button, or by selecting View Code from the Solution Explorer when right-clicking on the file. We replace the default implementation with the following:


' Analyze it and display the results

Our code is now ready to build. There is, however, one additional step needed for the application to run. When you receive a license key for RealDWG, you should also receive a public license file (client.snk) that needs to be bound to your application. There’s a utility that ships in RealDWG’s Utils folder – bindmgd – which does just that:

Now our application should run. All being well, when we select the DWG file we created earlier, we should now see the grid populated with data extracted from the 3D solids contained within it: 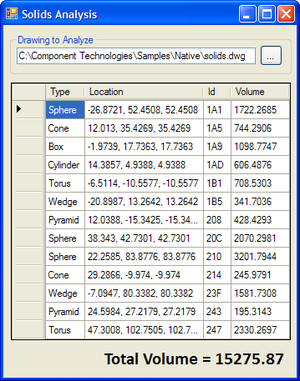