Today I started putting together some code showing how to link an Excel sheet to an AutoCAD table (watch this space - there should be something posted later this week). As I was working through it I decided enough was enough, and rather than - yet again - using the command-line to get the name of the file, I'd use the opportunity to demonstrate how to make use of AutoCAD's standard file selection dialog in your applications.

At which point I decided to cut the original post short, as I didn't want this useful (but quite short) topic to get swamped by the broader one.

Here's the C# code that asks the user to select an Excel spreadsheet:

A few notes on the arguments to the OpenFileDialog constructor:

If we were opting to allow multiple file selection (passing AllowMultiple as an additional flag to the fifth argument), then we would access the files returned using ofd.GetFileNames() to access an array of strings.

Here's the dialog we see when we run the SS command: 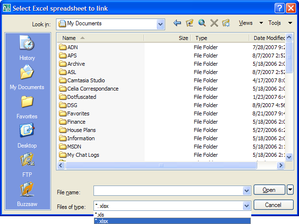